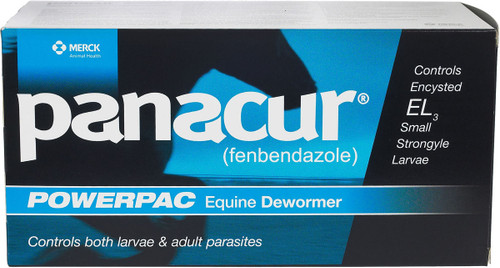 Due to complications with international customs agencies, we are unable to ship any wormers outside of the USA. We do apologize for the inconvenience.

Panacur (fenbendazole) Paste 10% is administered orally at a rate of 2.3 mg/lb (5 mg/kg) for the control of large strongyles, small strongyles, and pinworms. One syringe will deworm two 1,250 lb horses. For foals and weanlings (less than 18 months of age) where ascarids are a common problem, the recommended dose is 4.6 mg/lb (10 mg/kg); one syringe will deworm one 1,250 lb horse.

Panacur (fenbendazole) POWERPAC: Consult your veterinarian for assistance in the diagnosis, treatment and control of parasitism.